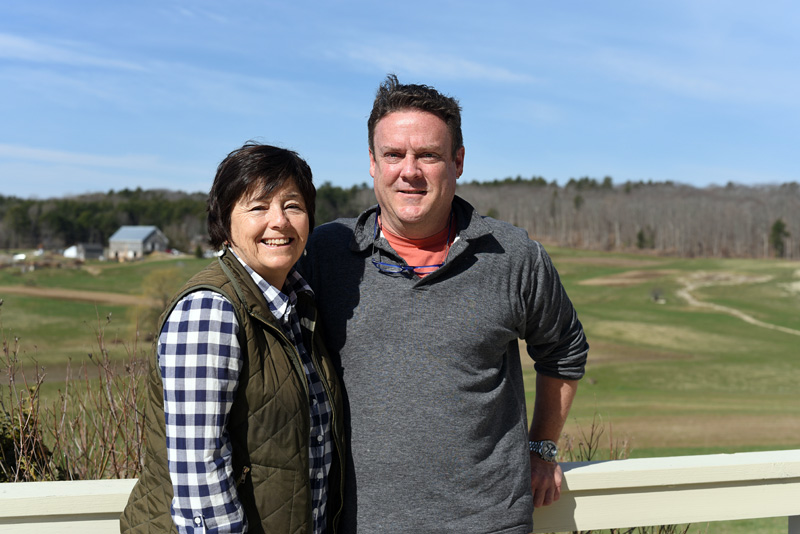 Kim McLellan and Mark Bartle at their home in Newcastle on Tuesday 24 April. They hope to open a restaurant in south Bristol in July. (Photo by Jessica Picard)

A Newcastle couple plan to open a home restaurant, The Patio, on Poorhouse Cove in south Bristol this spring.

The South Bristol Board of Selectmen held a public hearing to discuss entertainment and alcohol licenses for the restaurant on Thursday, April 19.

Mark Bartle and Kim McLellan presented their plans for the small restaurant at 1578 Route 129.

The restaurant would be in a family house, which belonged to Bartle’s grandparents.

The Patio would be open from 5:30 p.m. to 9:30 p.m. three or four days a week, and meals would be by reservation only. It would be open July through October, weather permitting, according to Bartle.

The restaurant would have five tables on a patio and could seat 24 to 30 people.

Dinner would consist of a five-course meal, with guests arriving at 5:30 pm There will be only one seat each evening.

“The idea is a set menu, so Mark may have two choices per night. You come for this experience, ”said McLellan.

Bartle, a graduate of the Culinary Institute of America in New York City, has worked in the kitchen for about 35 years.

He owned three restaurants, two on the island of St. Croix and one in Dennis, Mass.

Bartle and McLellan both worked at the Coveside restaurant in south Bristol. Bartle has been a chef for four years and McLellan a waitress and bartender for 10 years.

“I would like to do something more specific,” Bartle said.

“I want to do it at a much slower pace, with a smaller volume, where I can focus more on the craft,” he said.

There would be no bar in the restaurant, only the possibility of having a cocktail with dinner, according to Bartle.

“Dinner at the white tablecloth in a rustic setting” is how the couple describes the experience they are trying to create. They envision an intimate but relaxed restaurant.

“We want them to feel important,” McLellan said of customers.

“We really want to create an experience, but we want it to be very low-key. We want people to be able to enjoy a phenomenal meal, enjoy our artisanal wine list and just enjoy the scenery. And then we quietly turn off the lights and everyone go home, ”Bartle said.

Bartle and McLellan would be the only staff, although they could possibly hire a dishwasher if needed, according to Bartle.

According to Bartle, people walking past the house probably wouldn’t even be able to tell that it has a restaurant.

There would be no signage, other than “The Patio” in letters on the mailbox, and all exterior lighting would be dim and subdued, according to Bartle. The parking lot would not be visible from the street. It would be a non-smoking property.

William Dale, an attorney for the Portland firm of Jensen Baird Gardner & Henry, attended the meeting to represent Don Hirsch, a professor at the University of Virginia who has a summer residence about 400 yards from the proposed restaurant.

Dale said Hirsch had asked for a licensing decision to be postponed for two weeks, so neighbors could discuss the proposal.

“Do you know what happens in a small town in two weeks, when it happens in the streets?” We can’t have this meeting here; we’ll have it at the school. And you’ll want to be well prepared to take on the people of the city of South Bristol, ”board chairman Ken Lincoln told Dale.

There has been quite a bit of discussion as to whether a second public hearing in a few weeks would be necessary, in order to get the word out to neighbors and summer residents about the proposed plan.

Some participants felt that the public had not been given sufficient notice of the hearing.

The selectmen said the council does not issue or approve the liquor license, but only holds a public hearing before the application is sent to the state.

They requested that any entertainment license discussion take place then, rather than two weeks from now.

“I think the neighbors’ concern is noise,” said one participant.

“The entertainment would be purely, if you like, acoustic or slightly amplified,” in the case of a keyboard, Bartle said.

It was agreed by those in attendance that the restaurant could have Patriot Day entertainment on November 1 and that the music could not exceed 50 decibels within 100 feet of the establishment. The selectmen then approved the entertainment license.

Others present were concerned about light and noise pollution caused by slamming headlights and car doors. Some wanted to put a limit on the number of customers who could visit the restaurant at the same time.

The selectmen said the Maine State Fire Marshal’s office determines the capacity of a space. They said the concerns, while valid, were not part of the process for applying for a liquor license or an entertainment license.

“We are moving forward with this permit,” said Lincoln.

“I expected a lot of interest… it was more intense than I expected,” Bartle said of the public hearing.

However, Bartle and McLellan both said they understand why people would want more information about the changes in their neighborhood.

Bartle pointed out that the restaurant would have a “very light footprint” because it is part of a family home.

“In our vision, it’s an atmosphere of friends and acquaintances,” Bartle said.

a new nightlife option in Fort Worth

Caledonia Forest luxury restaurant and wildlife museum to arrive in 2023